WELCOME TO YOUR MADEIRA TRAVEL GUIDE

Madeira is located West of Morocco in the Atlantic Ocean. Together with Porto Santo and Ilhas Desertas, the island forms the region Madeira, as part of Portugal. The island Madeira is only 56 kilometers long and 21 kilometers wide, that once arose after a volcanic eruption. Thanks to its mild climate you can find a lot of green and flowers on the island.

The island Madeira has one airport, Aeroporto Internacional da Madeira Cristiano Ronaldo, but also known as Funchal International Airport. The airport is located on the East of the island. The landing strip is built over the water.

All the basics you need to know about Madeira, Portugal.

Things to See and Do in Madeira

Suggested daily budget – 70-80 EUR / 75-85 USD (Note: This is a suggested budget assuming you’re staying in cheap accommodation, eating out a little, cooking most of your meals, and using car hire. Using the budget tips below, you can always lower this number. However, if you stay in fancier accommodation or eat out more often, expect this budget to be higher!)

1. Buy your groceries in a big supermarket
Not every small town has a supermarket, other small towns have a small supermarket. In a few bigger cities you can find big supermarkets with lots of choices and offers. If you’re staying for a longer time, we suggest you buy groceries once every few days (or maybe even for a whole week) to save money.

3. Visit Miradouros for free
Most Miradouros (viewing points) that you find on the island are free. Here you can find free parking spots and the most beautiful views across cities and the ocean. Read our blog on the Must See Viewing Points in Madeira.

Thinking about visiting Madeira? We have selected a few of the finest accommodations, restaurants, and activities for you to explore during your trip. Taste the local cuisine, stay at a cozy B&B and get to know the Portuguese culture.

1. Budget accommodation
For just €43 per night you can stay in Calheta, a fun and vibrant city in the South of Madeira. Apartment Fontes offers you studios with sea view.

2. Mid-range accommodation
Glamping in Ponta do Sol is the perfect way to get in touch with nature, but with the comforts of your own home. Take a look at this glamping accommodation on Airbnb for €88 per night.

3. Luxury accommodation
Close to the sandy beach of Calheta, you’ll find this beautiful and typical Maderian cottage house with 2 bedrooms and a swimming pool, for €120 per night.

Well.com in the center of Funchal offers cheap, but very tasty meals in Maderian style. The hamburgers we’ve tasted were delicious.

A Taberna da Madalena is a creative beach restaurant with oceanview and good meals. Try the Espetada of cow meat that’s on their menu and you’ll have a great time.

Great quality in the center of Funchal and excellent reviews, that’s The Snug. A cozy restaurant/cafe that also offers vegan/vegetarian meals.

Cabo Girão is a viewpoint located near Câmara de Lobos. It’s a 580-meter high cliff that gives you a beautiful view of the sea. The entrance to this viewing point is free.

Explore the nature and woods of Madeira, during a 2,5-hour trail to the 25 springs of Rabaçal. There are also other routes that you can take, but this route is the most popular one. Read more about Levada das 25 Fontes.

Get ready for your upcoming trip with these travel guides.

Thinking about traveling to Madeira? Check out our latest blogs about this wonderful destination and read all about handy tips on activities, must-see places, and hotels. 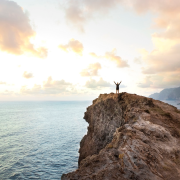 Hi! I'm Jeanine, a Dutch native who loves to explore travel destinations throughout Europe and the world. Number 1 on my travel bucketlist: Havana, Cuba.